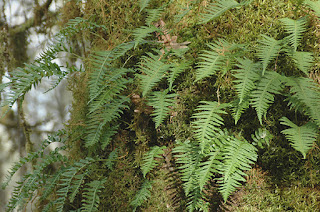 Identification Notes:
Rocks, mossy tree trunks, logs etc, below 600 metres in coniferous and mixed forests in California. Cliffs and rocky slopes along coasts, often epiphytic, on a variety of substrates.. In Oregon on the coast we find it growing in the moss covered big leaf maple trees

Root - raw or cooked The root is sweetly licorice-flavored but is thin and fibrous and virtually inedible. The root was commonly chewed for its very pleasant flavor by many native North American Indian tribes. It was often used as an appetizer, especially for children who would not eat. Apart from its used as a pleasantly flavored chew, it was seen as a famine food and was only used when there was a shortage of better foods.

Medicinal Uses:
Licorice fern was employed medicinally by several native North American Indian tribes who used it especially as a treatment for a variety of chest complaints. It is little, if at all, used in modern herbalism.  The raw rhizomes have been eaten, or an infusion has been used, in the treatment of coughs and colds, chest pains, shortness of breath. The roots have been chewed, and the juice swallowed, as a treatment for sore throats and the spitting or vomiting of blood. A tea of the pounded boiled rhizomes, mixed with fir needles, has been used to treat measles. Coughs have been treated by chewing and slowly swallowing the juice of the roasted rhizome. The roots have been used in the treatment of colds and sore throats. It helps reduce mucus membrane problems, and helps with coughs.

Dose:
I have not used it raw. Apparently eating the root raw can reduce your Vitamin B, and in my case I am already low in B vitamins so we dry it and use it to make teas and tinctures. 1ml of the tincture is what I normally take.
Document Results:
We make a tea from the dried roots, and currently have a Tincture in the cupboard.
Posted by Bruce Grieve at 7:05 AM